I have some confessions to make.

Some things to tell you about myself, just in case you were thinking it was safe to continue reading my blog. I need for you all to know exactly who you are dealing with and what I’m capable of. I’m not proud of my shady nature, but here goes:

1. I stole a Hershey bar from the grocery store when I was 5, and this directly led to me shoplifting makeup from Woolworths when I was 14. I got caught and my mom told me about the time she tried to steal goldfish from Woolworths when she was a kid, and I couldn’t fathom how exactly that would work, but I preferred not to ask her so it would remain a mystery.

2. In high school, when I would get bored with those awful droning teachers, the only way I could entertain myself, while looking like I was still paying attention, was to play with my eye sight. I would let my eyes go soft so everything in the room looked blurry, even the teacher. I would pretend I needed glasses. What I didn’t realize was that “making my eyes go soft” was actually crossing my eyes, so the teachers must have thought I had some wicked bad lazy eye going on.

3. I referred to making water balloons out of condoms in a Tutorial Tuesday. What you didn’t know was that this was based on an activity I enjoyed partaking in with my neighbor, Celeste. Luckily her parents didn’t use the spermicidal condoms.

4. Sometimes my sister and I go out together and drink alcohol on Cinquo de Mayo/Kentucky Derby day. Then we turn into 19 year old frat boys and do dumb things, like stick apple slices to windows and write each other fake checks.

5. During Jr. high, I wore a chin cup and head gear at night and drooled and suffered from terrible chin acne.

7. Twice I have seen a bumper sticker on a car that makes me giggle when it’s meant to make the reader horrified. It says,

My Son Was Murdered!

and I can’t help but read it like it’s a statement of excitement. My brain simply won’t let me read it as a devastating occurrence. I think it’s because why would you want to broadcast on the back of your car that your son was murdered? Why?

That’s pretty much it. I’m perfect other than this. 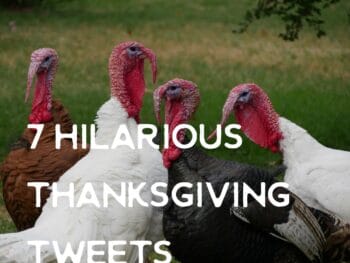 Do a Conference the Right Way
Next Post: Do Not Get Sick!

Have a Gratitude Explosion

How to Slay Your Next Dental Visit

Rediscovering My Very Dumbest Self

The Emotional Roller Coaster Old People Put Me Through

Oh Yes. How to Do a Road Trip